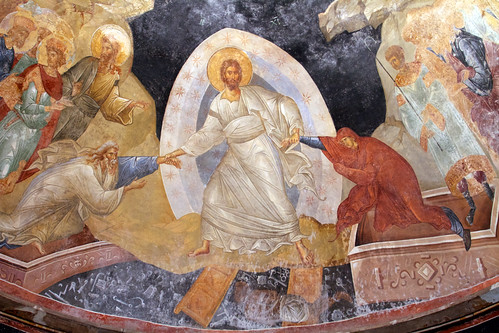 Jesus releasing the souls of the patriarchs and matriarchs from hell, beginning with Adam and Eve. 12th century fresco in the Kariye Camii Müzesi or Chora Church, Istanbul. Satan lies bound at Jesus’s feet, together with a profusion of broken keys and locks that once kept the prisoners captive.

The medieval English knew this scene as the “Harrowing of Hell.” It’s played to comic effect in the York Mystery Plays. Jesus arrives in great solemnity to break down the gates of hell and liberate the captives inside. Satan and the demons panic like the owners of a tinny house who have just realised that the police are battering down the front door.

The belief that Jesus descended into hell after his death is based on a number of biblical texts including1 Peter 4:6 For this cause was the gospel preached also to them that are dead, that they might be judged according to men in the flesh, but live according to God in the spirit. 1 Peter 19-20: For Christ also hath once suffered for sins, the just for the unjust, that he might bring us to God, being put to death in the flesh, but quickened by the Spirit: By which also he went and preached unto the spirits in prison; Which sometime were disobedient…

The so-called Apostles’ Creed, dating from the fourth century, also professes belief in the descent into hell.

This wasn’t easy to reconcile with the later Christian belief that the souls of the dead went immediately to eternal punishment or reward (the latter usually via purgatory). In other words, under this view, there shouldn’t have been any souls in hell for Jesus to liberate: they either deserved to be there and had to stay, or they were already in heaven. This was why many Protestant exegetes especially, were inclined to spiritualise these and similar verses away, arguing that they refer to Jesus’s “spiritual” typological presence in the Old Testament – e.g. in the warnings to Noah.

However, the older tradition persisted in the medieval church, and was partly responsible for belief in a hypothetical “borderland of the patriarchs” (Latin limbus patrum) – a fringe area around hell (but not quite hell) in which the souls of the Old Testament’s mothers and fathers waited for release by Jesus.

By the time of Dante’s Divine Comedy, this limbus also included virtuous pagans like Virgil, who would never get to heaven, but were not wicked enough to be consigned to hell. While deprived of the vision of God, they were believed to enjoy the highest kind of “natural” blessedness – i.e. to be as happy as any human can be in this life.

One thought on “Anastasis”